How To Make Your Own Harley Quinn Costume

Ever since the release of the movie Suicide Squad in 2016, Harley Quinn has been one of the most, if not the most, popular female supervillains around the world. Although she was originally introduced by DC Comics all the way back in 1992, she didn’t really break into mainstream stardom until recently.

She’s most famously known as the Joker’s sidekick and accomplice. She also happens to be romantically involved with him, which we learned from the 1994 graphic novel The Batman Adventures: Mad Love. Her story all started when she was a psychiatrist at the Arkham Asylum, where the Joker was a patient for some time. She volunteered to work with the Joker and finds herself falling in love with him, ultimately aiding him in his escape from the asylum. And from then on, she became his sidekick and on and off again love interest, donning a red and black jester costume.

Fast forward 20+ years later, and the famous Australian actress Margot Robbie takes the role of Harley Quinn in the live-action film called Suicide Squad. With a newly refreshed outfit and a badass personality to go along with it, Robbie helps catapult the character into a new spotlight. Out of nowhere, Harley Quinn started to amass thousands of fans globally and received a particularly high amount of attention from cosplayers. 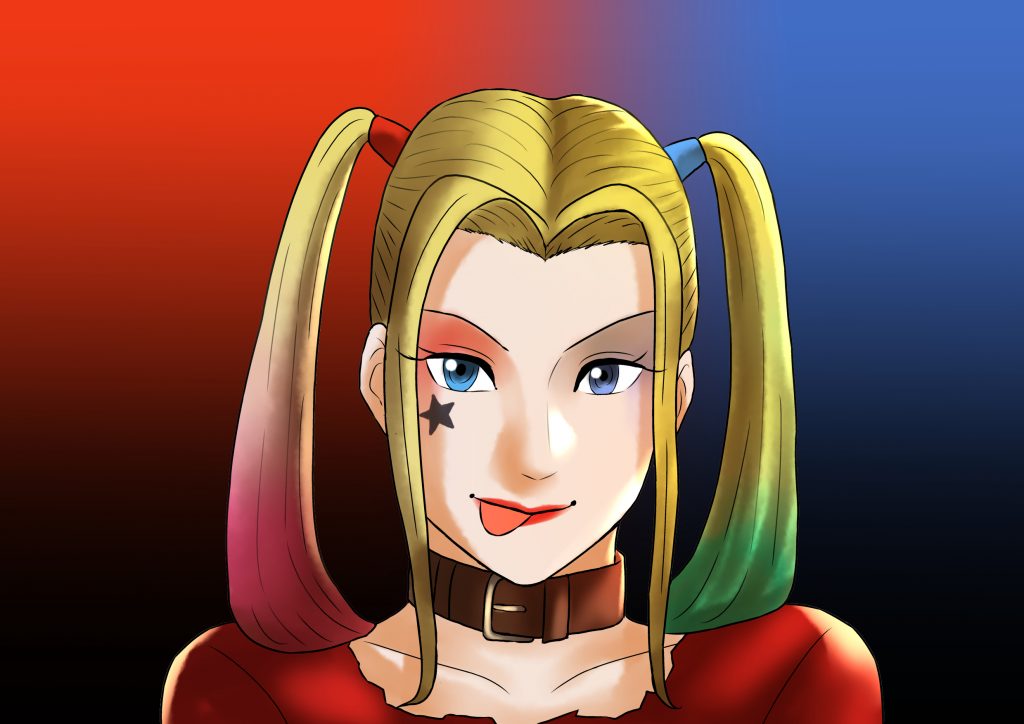 Harley Quinn has turned into an inspiration for cosplayers, who have eagerly posted their depictions of her all over the internet, each adding their own bouts of creativity to the character. So if you want to dress up as Harley Quinn, there is a ton of room for your unique ideas to come to life.

And luckily for your, we’ve gathered all of our top recommendations each part of Harley Quinn’s two costumes below. Read on to discover how to bring your very own Harley Quinn costume to life!

Create your own Harley Quinn costume

Whatchya all doin' today? Anyone else have a 3 day weekend? *waves hand in the hair* #harleyquinn #cosplay https://t.co/wcQziti3KQ pic.twitter.com/XQwQURbuXp

You’ll first need to decide on which version of Harley Quinn you’d like to cosplay. As we mentioned above, she has two main looks: her old-school red and black jester outfit or her new-school look with blue and red shorts, a ripped tee shirt, and blonde pig-tails dipped with blue and pink dye. The choice is up to you, but to makes things easier, this post outlines what you’ll need for both outfits and our recommendations on what to purchase to put together your own Harley Quinn cosplay.

Thank you to everyone who watched our @TwitchCreates stream ❤️

Old-school Harley Quinn looks like a full-on court jester. She wears a one-piece red and black outfit, often made out of latex to give it a shiny look. Her face is painted white, and she wears black lipstick, plus has a black eyemask painted around her eyes. On her head, she wears a red and black joker hat to match her outfit, with little white puff balls dangling on each end. Overall, the old-school Harley Quinn is pretty simple as her outfit doesn’t have too many pieces to it. Below is everything you’ll need to bring this Harley Quinn costume to life.

This red and black jumpsuit is a signature part of the old-school Harley Quinn costume. It’s a one-piece, unitard type outfit, with half in red and half in black. The red and black parts of her jumpsuit alternate. One of her sleeves is black, and the other is red, but then the opposite leg of her jumpsuit is red, and the other is black. In addition, the jumpsuit has a white-collar attached to the neck (you can also buy this separately if you would like). Finally, in some depictions, there are also diamonds affixed to the sleeve or legs to add some decoration. Here are some great options of red and back jumpsuits:

If you want some non-traditional options that are modeled off of her jumpsuit but are a bit sexier, check these out:

Your Harley Quinn costume wouldn’t be complete without the red and black joker hat that she wears on her head. It perfectly matches her red and black jumpsuit and has two white puff balls dangling from each end of the hat. We recommend these options if you just need to find the joker hat alone:

Another key part of Harley Quinn’s costume is her eye mask. The eye mask is all black, and circles around both of her eyes, creating a border-like look. You can paint the mask on your face directly with any of the makeup options below:

And if you don’t want to paint your face, check out these simple mask options:

In this look, Harley’s hands are covered by one red and one black glove. Luckily, these are pretty easy to find, and we recommend any of the options below:

Harley Quinn’s outfit includes white ruffled handcuffs that she wears on her wrists. These are super easy and simple to add to your costume! We recommend any of the options below:

As we mentioned earlier, Harley’s jumpsuit is paired with a white neck collar or choker that she wears around her neck. Any of the following options will work if you need to purchase one separate from her jumpsuit:

The only accessory that Harley Quinn has with her old-school look is a red and black mallet that she holds in her hands. And, of course, the mallet happens to match her outfit. Here are some mallet options for your Harley Quinn costume:

If you end up choosing a non-traditional red and black outfit for your Harley Quinn cosplay, you might end up needing some socks. We’ve put together our top recommendations for you below:

To top off your costume, you’ll need a pair of fabulous shoes! Here are our favorite options to dress up your feet for your Harley Quinn costume:

The new-school Harley Quinn look is probably the more popular option of the two as it is the most easily recognizable version of the character. This look is straight out of the movie Suicide Squad and was popularized by the famous Hollywood actress, Margot Robbie. Instead of using red and black in this outfit, Harley Quinn replaces the black with blue. And she completely ditches the jester look. The result is an entirely new and different Harley Quinn, who looks way more badass than before! Here’s what you’ll need to bring the new-school Harley Quinn look to life.

A signature piece of this Harley Quinn outfit is her extremely short blue and red shorts. They are flashy and bright and really stand out. These shorts are typically a very short length and are a pretty tight fit. Here are some of the best options for her shorts:

Harley’s t-shirt is another critical part of her outfit. The shirt is predominantly white and has black cursive text that reads “Daddy’s Lil Monster.” The top part of the t-shirt, by the shoulders, is a bright red color to match her shorts. There are also two white stripes on each of her sleeves. The t-shirt also features some holes and rips in it, making it look distressed. These are some great options for t-shirts:

Another key part of Harley Quinn’s new look is her jacket. This jacket is also blue and red, which matches her shorts. The back of it features several pieces of gold foil text that reads “Property of Joker,” “Established since 4ver,” and “Pudding Freaky Style.” Luckily, there happen to be some very authentic jacket options for you to consider purchasing:

Another signature feature of the new-school Harley Quinn is her hair. In the movie Suicide Squad, we see Harley with light blonde hair, pulled back into two pigtails. The ends of each pigtail are dyed a different color — one pink and one blue. Because we assume that most people don’t have hair like this already, it’s probably easiest to get a wig. And we’ve found some great wig options for you:

The next component of Harley’s costume is her gloves. They are blue and red and match the rest of her outfit. They don’t fully cover her fingers as there are holes cut out that each finger slips right into. The gloves are primarily red and have a blue stripe on them. Here are some glove options for you to choose from:

Harley Quinn wears a black belt with gold studs to go over her blue and red shorts. The belt is black leather and has gold hardware, including a large gold diamond on the center of the belt that hooks the ends of the belt together. These four options below are all great options for her belt:

There are two different bracelet styles that Harley Quinn wears on her wrists in her new-school look. The first is a set of simple gold spiked, metal bracelet cuffs. The second is a set of two purple leather strapped bracelets with gold hardware on the front that reads “Yes” on one bracelet and “Sir” on the other. Either bracelet style is fine, you’ll just have to pick the one you prefer. Once you do that, check out our bracelet recommendations below:

In her new-school look, Harley Quinn is frequently seen carrying a baseball bat. Harley’s bat has a unique design and a bit of writing on it. Most notably it says, “Good Night.” Here are some authentic bat options for you to look at:

If you don’t like the idea of carrying around a bat, you can consider getting Harley’s mallet, which has the infamous Suicide Squad smiley on each end. There are a couple of great, pre-made and ready-to-go mallet options for you to consider:

Because Harley’s blue and red shorts are so tight, most cosplayers prefer to wear some sheer tights or fishnets as a part of their outfit. These are super easy to find and usually pretty cheap. Plus they are a great accessory to have in your cosplay closet. Here’s what we recommend:

The final part of the Harley Quinn costume is her shoes. While the heeled sneakers are the most authentic because that’s what Margot Robbie wears in the movie, you have the flexibility of choosing whichever shoes you’d like. And we recommend any of the following options:

How about a little pin-up, Puddin'? 😉 <3
Photo by @GapplePhotos#HarleyQuinn #cosplay #latex
More at https://t.co/uk8TIO8gSa pic.twitter.com/Mfsqrh2ZDp

Now that you’ve made it to the end of this post, you’re now officially ready to create your Harley Quinn costume! And you can’t go wrong with either her old-school jester look or her new-school Margot Robbie inspired look. We hope all of the recommendations above help you on your way to transforming into this infamous supervillain!