How to get into eSports

Getting your foot into the eSports world

Believe it or not, even though the rise of eSports can be seen all around the world, getting your very own seat at the table of the global phenomena is not quite as easy as it may look. Sure playing video games for a living may appear to be a pretty straightforward career path. You simply sit down one day, play your favorite game, and if you dedicate yourself long enough, you will eventually crack into the professional ranks. Right? Well, not so fast. There is more than what meets the eye when it comes to diving head first into eSports.

As one of the fastest-growing industries in the world, eSports is only expected to get larger and more lucrative as time goes on. This growth is prompting gamers across the world to take a second look at the niche that was once the exclusive purview of East Asia and a few small esoteric leagues otherwise. As a multi-billion dollar industry, eSports is set to attract thousands of talented players and will feature games as varied as fighting titles, or first-person shooters, all the way to multi-player online battle arenas (MOBAs). It’s an exciting time in the history of eSports!

If you are an aspiring gamer who wants to get involved in eSports but are wondering where to even begin, look no further. In this article, we’ll discuss the 10 critical things you should know when learning how to get into eSports. Those 10 things are:

These tips should help you develop some idea of what you might need to do to prepare yourself for such a demanding career. After all, while you can make a lot of money, eSports can be demanding in terms of time and personal commitment. Nonetheless, this advice should help streamline the process for you. 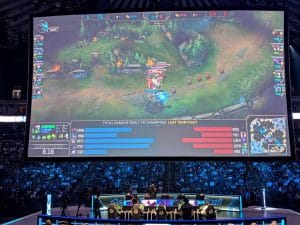 The most significant choice you can make in your eSports career is what game to play. Not only will this be your calling card, but also your specialty. You should choose wisely because you’re going to really get to know it over the coming months. Whatever title or genre you choose, you will put a ton of time into mastering it. From mechanics to glitches to quirks you will become so familiar with your chosen game that you will wonder if you made it.

The game you choose needs to be a combination of something that you are skilled at playing, but also something that you enjoy. That’s a tough thing to estimate before even playing a game thus the universal recommendation that you dabble around with new stuff before settling on one game. If you intend to do this professionally, then you will need to dedicate yourself to your craft. Knowing what you want that to be is the first and most important question that you will have to answer at the beginning of your eSports career.

Getting started with your eSports career is as much a matter of knowing how to start on the path as knowing where you want to end up at the end of it all. Trying different games will not only give you a sense of what you like or what you’re good at but also how viable it is for the long run.

Once you’ve selected a game, you need to establish a practice schedule – and stick to it. If you’re doing eSports full time, as most aspiring athletes do, then you will need to set aside at least five to seven hours a day to practice. Depending on where your skill level is, in the beginning, you may need to adjust this schedule accordingly but expect it to be pretty intense throughout. Even when you think you are good enough to play professionally, you’re probably still far off the mark when it comes to having the same abilities as a professional.

A critical aspect of starting anything new is that you have to find a way to stay motivated. No one goes to bed and wakes up a superstar, so don’t expect this to happen for you. But that doesn’t mean the grind isn’t real. Finding ways outside of gaming to help structure your life and keep the fire burning is one of the best things you can do for your future career.

For example, sticking to an exercise schedule can help your brain reset and maybe even overcome roadblocks you encounter in your training. Don’t burn yourself out by playing too much. Balance is the key to anything in life with gaming being no exception.

4. Get the right gear 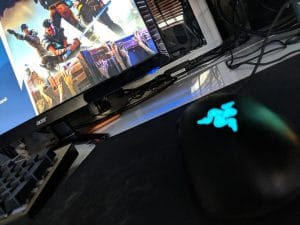 This doesn’t only involve gear such as your computer or home console of choice but also monitors, glasses, and anything else that will help you game for hours on end. Some of you might be asking, “why isn’t this the first piece of advice?” but, if you will recall, the first bit is to decide on what kind of game you want to play which will determine what type of gaming you want to do. You don’t need to buy a console to game, nor do you need to buy a computer, but you need to do this if you’re serious and in it to win it.

People just starting out may not be at this stage so finding some other way to game is not only economically wise but smart. There is nothing more soul crushing than buying an expensive gaming rig only to find out you absolutely hate League of Legends. Once you’ve moved beyond the preliminaries, however, you will either want your own equipment or even better equipment than you currently own. On top of this, you will want to look into keyboards, mice, joysticks, gaming chairs, gloves, and even specialized glasses that reduce eye strain to help you maintain the tough training schedule you will have to follow.

5. Get involved in the online community

Once you’ve begun to establish your skills, you need to start building a reputation online through the various communities dedicated to your game. There is usually an official, company-sponsored channel and a myriad of unofficial channels for any eSports title. You’ll also probably find a great, and very active, subreddit on the specific game you play. A quick Google search will reveal the largest and most relevant.

You should involve yourself in as many of them as possible and be an active, contributing member of the community. Not only will you find others with similar goals but you will also make potential connections that can help your eSports career. These places are usually some of the first locations to learn about new and upcoming events as well as tournaments making them truly indispensable to people just starting out in eSports.

Another excellent way to get into eSports is to start a Twitch or other streaming account like YouTube Gaming in order to build a fanbase. Not only will this help when you participate in tournaments but also can make you eligible for lucrative sponsorships and deals down the road. Coming with a large, built-in audience is not only a benefit to the company that sponsors you but any team you might join as well.

When you’ve built up enough confidence to exhibit your skills publicly, then you need to start considering participation in eSports tournaments geared towards your level. Working your way through these circuits will help you get some sense of where you stand as well as exposure to the unique environment of a gaming tournament.

It is here that you will build a resume of tournament winnings to help you with future applications to eSports teams. In fact, when starting out, most athletes do as many tournaments as they possibly can fit into their schedule. This has two significant benefits. First is that you can make a name for yourself, and second is that you can make connections in the industry.

8. Reach out to teams

Once you’ve built up some kind of resume in the tournaments circuit, you can begin to reach out to professional teams and put your name out there for consideration. Most sponsored teams won’t even consider someone without some kind of history in known tournaments. Doing well in competitions is typically a sign that you are ready for a more professional focus. It isn’t impossible to become a big deal in eSports without a team, but it helps to be signed to one nonetheless. Of course, if you’re good enough, teams will most likely proactively reach out to you.

You need to pursue any and all social media platforms that you can when you start out in eSports. This is a huge opportunity to reach your audience as well as let them know about what’s going on in your career. This will become increasingly important as you need to monetize your activities to keep things going. Having a large fanbase is also something many eSports teams find attractive when looking at prospective players.

10. Find sponsorships and other related income

All of this culminates in the crux of your eSports career: sustainability through making money. When an eSports athlete makes it big, the money (and expenses) associated with that also go through the roof. Building a solid, all-around foundation as your career moves forward will help you weather the bad times and reap the windfall in the good times. One of the most common ways eSports stars make money is through sponsorships and advertising offers. Though this is something that comes after you’ve established your career, it is nonetheless a pillar upon which the economic viability of an eSports career is based.

Now you know the path of how to get into eSports

Hopefully, after reading this article, you now feel much more equipped and have a better understanding of how to get into eSports. Often times most people don’t even know where to begin and are overwhelmed with information related to how to kick off a new eSports career path. The steps outlined above are intended to simplify this process for you and help you on your journey towards a career in the booming eSports industry. Again, as we mentioned previously, creating a successful eSports career won’t be easy and will be demanding both in terms of time and commitment. You will have to work extremely hard and be patient, and even then, your success is not guaranteed. However, should you make it big and become a successful eSports pro, it will all be worth it. Trust us!

A Few Dos and Don’ts of eSports Betting