10 Best Cosplay Ideas (A Few May Surprise You)

All You Need Is A Little Cosplay Inspiration

There you are, endlessly searching the internet again to find the perfect cosplay for the upcoming convention. But, all you seem to find is a lot of “been there, done that.” With all of the new exciting characters entering the cosplay scene lately, it can sometimes feel overwhelming to find the perfect cosplay that means a lot to you and also cause heads to turn when you walk by.

As any experienced cosplayer will tell you, doing cosplay the right way can often take a lot of planning and a high degree of meticulous detail. However, not everyone has the time to go all out in order to transform into their character. And even worse, sometimes cosplay creative block can hit you at the worst times – and that’s perfectly okay!

We’re here to help with 10 sure-fire cosplay ideas that will make you a star at your next convention or event. From new characters to classics, here are our 10 top picks!

Here are our top 10 best cosplay ideas for you to consider: 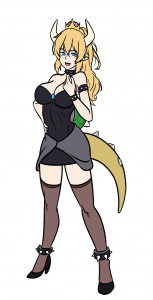 Our top pick for best cosplay idea might come as a surprise, but it makes sense given her quick rise to stardom. Bowsette is a character hybrid between Nintendo’s Princess Peach and Bowser. She’s got fangs, pale skin, long blonde hair, horns, and is equipped with spikes on her wrists, biceps, ankles, and tail. A seductress at her core, it’s only a matter of time before Bowsette draws you in with her devilish grin and buxom bosom.

To successfully pull off a Bowsette cosplay, you’ll need to bring your best effort and attitude. She is not easy to please and plays hard to get. Bowsette is a sexy and alluring creature, and your cosplay should try to mirror this. Some cosplayers will use their hands to pose in a seductive way, making a “rawr” motion like a fierce lion would. With Bowsette, it’s all about how you embody her seductiveness and her bossy attitude. She’s the leader of the pack and isn’t afraid to take charge, and neither should you if you decide to cosplay her.

Bowsette’s costume is a bit complex because it requires several unique and custom pieces. But the extra work is definitely worth the effort because the finished product is what makes Bowsette our #1 pick for best cosplay ideas. The list below includes what you can expect to need to make your own Bowsette costume. We’ve included only one recommendation for each piece, but If you want our full list of recommendations for various pieces of her cosplay, check out our full guide on how to make your own Bowsette costume.

Pick #2 has absolutely blown up the cosplay world over the past few years, ever since the live action film Suicide Squad was released. We’re of course referring to Gotham City’s most notorious female criminal, Harley Quinn. She’s famously known for originally being the Joker’s psychiatrist who later turned into his sidekick and on-and-off-again love interest.

Harley is unpredictable and crazy. You never know what her next move will be. She is also an extremely loyal sidekick to the Joker, never turning her back on him. This often comes at her own expense.

Harley Quinn is an interesting cosplay because you actually have two options to choose from: her classic red and black jester outfit or her new-school look Suicide Squad outfit. Both are quite different from each other with no overlapping pieces, so you’ll need to decide which one you like better. 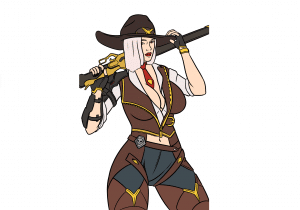 Pick #3 has been massively popular since her introduction into the Overwatch universe for the cosplaying community! Leader of the Deadlock Gang, Ashe defines herself as a kick-butt woman who can definitely hold her own when it comes to fighting and conflict. While she may be a newer hero for the game, she has definitely been well represented when it comes to cosplay.

Ashe is a strongwilled, powerful and take charge character. When cosplaying her, be sure to bring some of that attitude to the table, just to make things more fun and immersive. Sometimes acting like your character can be half of the fun! 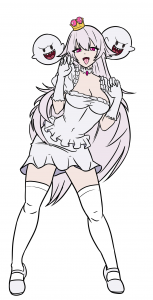 Just like Bowsette, Booette is having her time in the spotlight! Just the right blend of creepy and cute, Booette definitely packs a punch in all white apparel. Booette is particularly fun to cosplay because a lot of the creative decisions are up to you, which makes it a really personalized and fun cosplay to make!

You can dress her up or down, all depending on how comfortable you would like to be and your personal taste. There isn’t a ton of cosplay with this much freedom, which makes it unique and definitely worth trying out!

Grab some ghostly garments, some friends, and get ready to impress everyone at your next event! If you would like more details on how to make a Booette cosplay, read our full guide to Booette cosplay here. 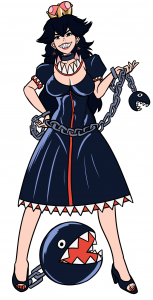 Similarly to Booette and Bowsette, Chompette has also had a quick rise to fame in the cosplay community. A little more domineering than Booette, Chompette is truly in charge! She’s snarky, confident, and maybe even a tiny bit bossy. She’s going to get what she wants – or else.

Chompette is also a fun cosplay because, again, she allows for a lot of creative freedom when you are making your cosplay. Customize her just to how you’d like, and make this cosplay really your own! She’s definitely found her way into the hearts of fans and cosplayers alike. 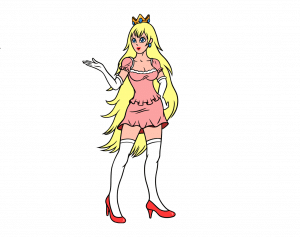 Princess Peach is the beloved princess of the Super Mario Universe. While it seems that she manages to find trouble wherever she goes, her ultra-feminine design and cute personality have made her a hit with fans since the game franchise started years ago. With the release of Super Smash Brothers for Nintendo Switch, she has found her way back into the spotlight and into our hearts yet again. It’s the perfect time to cosplay Princess Peach!

For even more fun, have a friend be Princess Daisy! There’s nothing cuter than the iconic duo, and having a friend to take photos with will make it all the better. 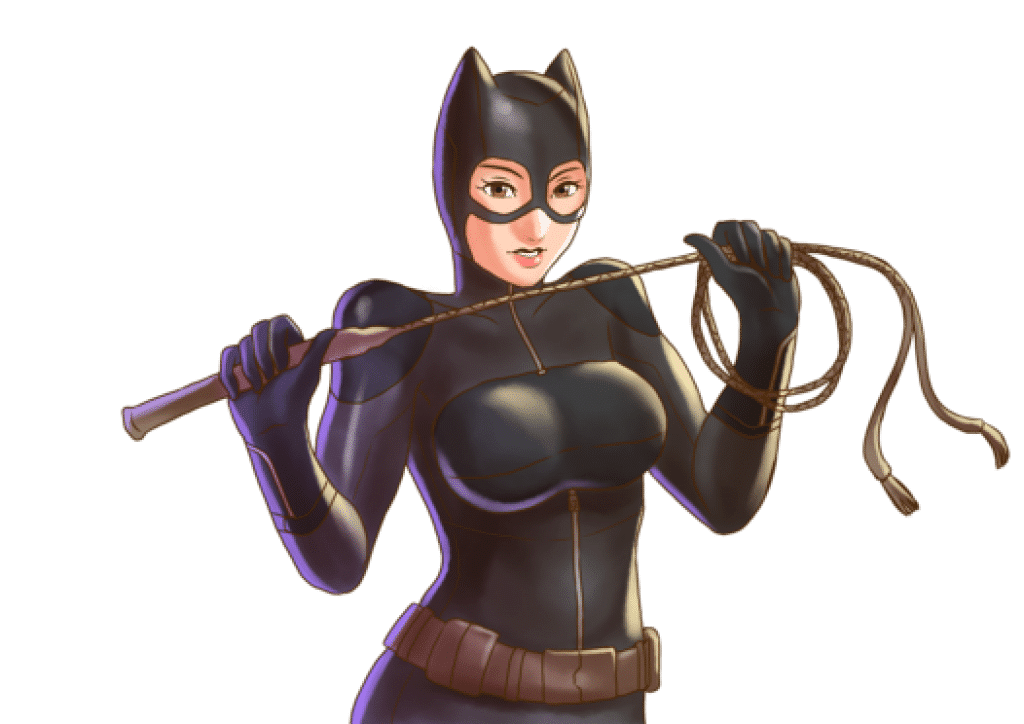 Next up on our list of best cosplay ideas happens to be one of the most iconic supervillains around, Catwoman. She happens to be another one of Gotham’s female criminals who is well known for her skin-tight catsuit and black cat mask. She’s a master with her whip, a skilled acrobat, and an expert at breaking and entering to steal from the city’s rich and corrupt. Catwoman is also extremely well known for being Batman’s on-and-off again love interest over the years.

Doing a Catwoman cosplay isn’t just about looking like her. You should also embody some of her strongest personality traits, like athleticism and sassiness. Catwoman has the acrobatic skills of an Olympic gymnast and an elite parkour athlete. While you might not have the same physical abilities as her, you can highlight some of her natural flexibility by posing in distinct crouching positions. She also brings some major attitude, sarcasm, and wit. She’s the epitome of sassy, and so you’ll need to bring your fierceness when you cosplay Catwoman.

The beauty of Catwoman’s costume is how simple it is to assemble. With under 10 total pieces, you could be well on your way to transforming into this feline. The links below are simple examples of what you can find for each piece of her costume. Here’s what you’ll need to assemble your very own Catwoman cosplay:

If you’re interested in looking at additional recommendations for each of the items above, check out our full guide on how to make your own Catwoman costume.

With the latest Wonder Woman film out, there is no wonder that she’s a top pick for cosplayers right now! With her classic look, confident personality, and kick butt fighting style, shes an empowered and bold woman that we all strive to be. She’s both powerful and beautiful, which makes her an amazing pick for an upcoming cosplay!

Wonder Woman can hold her own in a fight, and certainly doesn’t need any help from the guys! Being so powerful makes her a fun cosplay pick; be sure to snap some photos with your hands on your hips in a super confident pose! 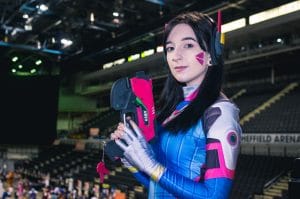 Pick #9 is a mega-popular pick in the cosplay world. Everyone wants to be a powerful female character, and D.Va is an amazing choice! Pro gamer and Mech Pilot, the original Overwatch hero has become a fan favorite with her quirky voice lines, cute skins, and boisterous personality. She’s cute and sweet, but she can also make or break a match with her ultimate Self Destruct. When you hear “Nerf This!” you know it’s time to take cover, or she’ll send you back to the spawn room.

Personality wise, D.Va is a sassy and feminine girl, but don’t think for a minute that that doesn’t mean that she can’t fight. Without her, the payload may not get anywhere near the finish line!

A D.Va cosplay is a great pick for anyone, whether you are an experienced cosplayer looking for something a little more comfortable, or a new cosplayer looking to try for the first time. Her popularity with the fan base and personality really make her a great character to cosplay! 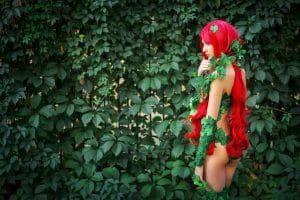 Poison Ivy is a classic villain in the DC Comic universe. She tends to be a popular pick over the years for cosplay, and there’s no doubt it has to do with her sexy attitude and appearance. While she has had many costume changes over the years, we are going to focus on a more classic version of Poison Ivy.

Like many of the female characters that we love, Poison Ivy brings major personality to the table, but also a palpable sex appeal that leaves many fans swooning. Her costume design may be more simple at times, but that doesn’t stop her from having a major visual impact. When you’re short on cosplay ideas, sometimes it’s a good idea to turn to the classics!

So what are your best cosplay ideas?

Now that you have seen our top 10 list for best cosplay ideas, remember there are truly endless possibilities! What did we miss? What would you add to this list? Make sure to leave a comment below and tell us how you cosplay!